Photovoltaics are best known as a method for generating electric power by using solar cells to convert energy from the sun into a flow of electrons. The photovoltaic effect refers to photons of light exciting electrons into a higher state of energy, allowing them to act as charge carriers for an electric current.

Deep Cycle Batteries are the key component in various types of renewable energy systems that require the storage of electricity.  A battery is essentially a storage vessel for electricity.  A battery bank can provide a relatively constant source of power when the grid is down, or during periods when your photovoltaic system is not producing power.

Batteries are basically the only method to store direct current (DC) power produced from sources like solar panels, wind generators, micro-hydro or generators.  Amp hour is the unit of measurement used to express the storage capacity of deep cycle batteries.  The Amp hour rating, written as Ah, will tell you how much amperage is available when discharged evenly over a 20-hour period.  Twenty hours has been the standard time length for rating batteries, although shorter or longer time variables may be used depending on the application. 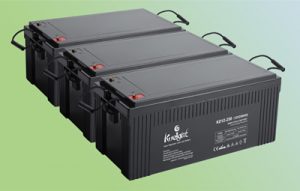 Speaking about batteries lifespan, most of the loss incurred in charging and discharging batteries is due to internal resistance, which is eventually wasted as heat.  Efficiency ratios are relatively high considering that most lead acid batteries are 85 to 95 percent efficient at storing the energy they receive.  Deep cycle batteries used in renewable energy applications are designed to provide many years of reliable performance with proper care and maintenance.  Proper maintenance and usage play a major role in battery lifespan. The most common causes of premature battery failure include loss of electrolyte due to heat or overcharging, undercharging, excessive vibration, freezing or extremely high temperatures, and using tap water among other factors.

Power inverter is a device that converts electrical power from DC form to AC form using  electronic circuits. Its typical application is to convert battery voltage into conventional  household AC voltage allowing you to use electronic devices when an AC power is not available.

A power inverter device which produces a smooth sinusoidal AC waveform is referred to as a sine wave inverter. To more clearly distinguish from “modified sine wave” or other creative terminology, the phrase pure sine wave inverter is sometimes used. In situations involving power inverter devices which substitute for standard line power, a sine wave output is extremely desirable because the vast majority of electric plug in products and appliances are engineered to work well with the standard electric utility power which is a true sine wave.

Typical applications for power inverters include:

We can find also many categories of Sine wave inverters :

Solar cable is the interconnection cable used in photovoltaic power generation. A solar cable interconnects solar panels and other electrical components in the photovoltaic system. Solar cables are designed to be UV resistant and weather resistant. It can be used within a large temperature range and are generally laid outside.

One common factor for most of the photovoltaic power systems is outdoor use, characterized by high temperatures and high UV radiation. Single-core cables with a maximum permissible DC voltage of 1.8 kV and a temperature range from -40°C to +90°C are generally used. A three-core AC cable is used for connection to the grid if a single-phase inverter is used, and a five-core cable is used for three-phase feed-in. Solar cables should be well calculated in order to minimize the voltage drop.

MC4 connectorsare single-contact connectors commonly used for connecting photovoltaic panels. MC4 stands for the manufacturer Multi-Contact and a 4 mm2 contact assembly pin. The MC4 connector is UL rated at 20A and 600V maximum, depending on the conductor size used.